Many people have a deep fondness for Christ Church Guilford, whose white steeple serves as something of a “welcome to Vermont” sign from Interstate 91. The church is where couples have exchanged wedding vows, where relatives have had their funerals, and where services are still occasionally held. The town of Guilford, the Board of the Society, members of St. Michael’s Episcopal Church in Brattleboro and many others have strong emotional bonds with this historic structure and are committed to its care.

The building itself has its roots in the early 19th century. Once the early colonists of the new nation accepted the Anglican faith, which became the Episcopal Church after the Revolutionary War, that branch of Protestantism spread, and the first Episcopal bishop of the Eastern Diocese (which included Vermont, New Hampshire, Massachusetts, and Rhode Island), Alexander Viets Griswold, was ordained in 1811. Like other early New England towns, Guilford grew rapidly in the post-Revolutionary era; three Guilford communities had churches by the early 1800s. As Robert Anderson notes, the townspeople of the village of Algiers decided in 1817 to erect their own house of worship, and the Episcopal faith was adopted following an impressive visit to the area by Bishop Griswold. The land on which Christ Church Guilford was built was donated by local citizen Ephraim Gale; the name Gale surfaces several times in the history of Christ Church.

Christ Church was constructed and consecrated in 1817, with the farmers and craftsmen using local materials in the church’s construction. Architecturally, the building was patterned after St. James Episcopal Church about 20 miles away in Greenfield, Mass. (that structure has not existed since around 1847).  Anderson notes that money was raised for the Guilford church starting in 1818 by auctioning “the curiously uncomfortable straight-backed pews.”

By 1849, Christ Church had had five rectors and was fairly healthy. However, the coming of the railroad to Brattleboro in 1851 effectively passed Guilford by, causing the town to lose population and leading the Episcopal community to establish a new church in Brattleboro. The number of worshipers at Christ Church decreased significantly, and by 1876 the parish bade farewell to its final rector. [Click here for a list of the early clergy of Christ Church.] 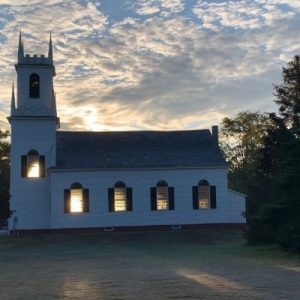 What, then, to do with a beautiful historic, unused building? One option is to move it elsewhere! This was, in fact, a viable possibility when Electra Havemeyer (Mrs. J. Watson) Webb offered to move it to what ultimately became the Shelburne Museum in northern Vermont.  Mrs. Webb’s suggestion created quite a stir in the greater Guilford area, leading to a group of townspeople – led by one John C. Gale – to raise money, petition the vestry for the right to maintain the church on its original land, and incorporate The Society for the Preservation of Christ’s Church in Guilford. (Anderson notes that the vestry was reluctant to take on this responsibility, although they did, and that attorney Richard Gale, John’s nephew, “remarked exasperatedly that he thought this had been the worst idea his uncle had ever had.”) And here we are!

Christ Church Guilford is not only a historic building – listed on the National Register of Historic Places – but also a beloved site for concerts, weddings, funerals, church services, and other events. Descendants of the original townspeople who “bought” pews to raise funds often return to see the name plates still on the pews. Also, in Summer 2020, early Fall 2020, and Summer 2021, the church served as a beacon of hope in a world paralyzed by the tragedy and fear of the coronavirus pandemic: a number of services were conducted outdoors on the lawn when very little could take place indoors in person.

Christ Church is owned by the Trustees of the Episcopal Diocese of Vermont, but its health and well-being are the responsibility of the Society, St. Michael’s Brattleboro and interested citizens of Brattleboro, Guilford and surrounding communities. As stated in the 1951 Articles of Association of the Incorporated Society for the Preservation of Christ’s Church in Guilford, the church is to stand “on its original site forever,” and the Society is “to provide for the restoration and preservation of the Church as an historic landmark and an example of early New England architecture and as the First Episcopal Church in Vermont.” Further, the Society is charged with providing “for the care and maintenance of the building . . . and grounds” and for ensuring “the improvement and preservation of the building and grounds in substantially its original status but with inconspicuous modern improvements for the convenience and comfort of persons and the more effective safeguarding of the building and grounds.”

This is a heavy responsibility and presents many challenges. Some of those challenges include ensuring the viability of the roof and the basic architectural structure, maintaining the heating system and reed organ, keeping the grounds well-manicured and guaranteeing the safety of all users. Except for the small vestry chamber at the altar end of the building, there are no meeting rooms, nor is there water or sewer, thus limiting the building’s flexibility. As Robert Anderson noted, the beautiful pews can be uncomfortable, some of the windows are hard to open, and the sanctuary can get quite warm in the summer. [Click here for a list of those who paid for the pews in 1818.]

The Articles of Association and other historical documents of the Church grant the Society certain rights. The current Board is striving to take advantage of those rights to ensure that Christ Church Guilford survives and thrives for at least another 200 years. Some of the current initiatives, which dovetail well with the original vision, include:

Over the past several decades, Christ Church Guilford has been tended by a dedicated group of volunteers, and its upkeep completely depends on those friends and their efforts. The Society welcomes hearing from those who wish to offer their time and talents.

We also welcome financial tax-exempt contributions, especially as we celebrate receipt of a generous matching grant from the Vermont Division of Historic Preservation. Thank you!